Some investors are naturally patient. Others prefer fast-developing situations. A 3-weeks-tight pattern, a square box or a flat base favors the quick-acting investor.

When a stock takes only a handful of weeks to sketch a valid buy point, you must be ready to buy. An initial public offering that shapes its first IPO base also requires quick recognition.

The saucer base, however, requires a different skill set. The saucer must be at least seven weeks long, but it often will consolidate far longer — sometimes as long as one or two years. Unlike a deep cup, this pattern is shallow in depth. But the correction can still be as deep as nearly 30%.

To the impatient investor, the saucer might look more like a stock in a coma than a healthy opportunity.

Yet you don’t want your temperament to shape your investing. If you let personal inclinations dictate strategy, then you’re shrinking your opportunities right from the start.

It’s better to be flexible. When circumstances call for patience, resist the impulse to act. When the situation demands quick recognition and immediate action, then act.

How To Use Stock Charts: Spotting The Saucer Base

In order to spot the saucer, you must look at the chart action over a longer period. If you look only at recent action or only at daily charts, you might never see the saucer.

The saucer base has some unique associations.

A long saucer takes a much longer time to shake out weak holders than a shorter, deeper base does. A 12-week cup, for example, corrects more quickly. When the stock climbs the right side of a cup, approaching its high, the last of the weak holders sell. They fear another sharp downtrend. The weak holders’ selling sketches the handle.

The saucer can form a handle too. But time, not price, is often another irritant driving weak holders out of a saucer base. Sideways action can also make potential investors drop the stock from their watch list.

A stock in a saucer base also might have a weaker ratings profile than a stock with a faster-developing base. The Relative Price Strength Rating might be lower than you’d expect. Some of the longer saucer bases might also feature stocks not normally associated with fast growth.

Then, too, the market itself might be in more of a sideways pattern, fostering saucers with good relative strength. That’s what happened in 1980-82.

GE’s Big Run Began With A Saucer Base

Meanwhile, General Electric (GE) edged up 4% in the same period. 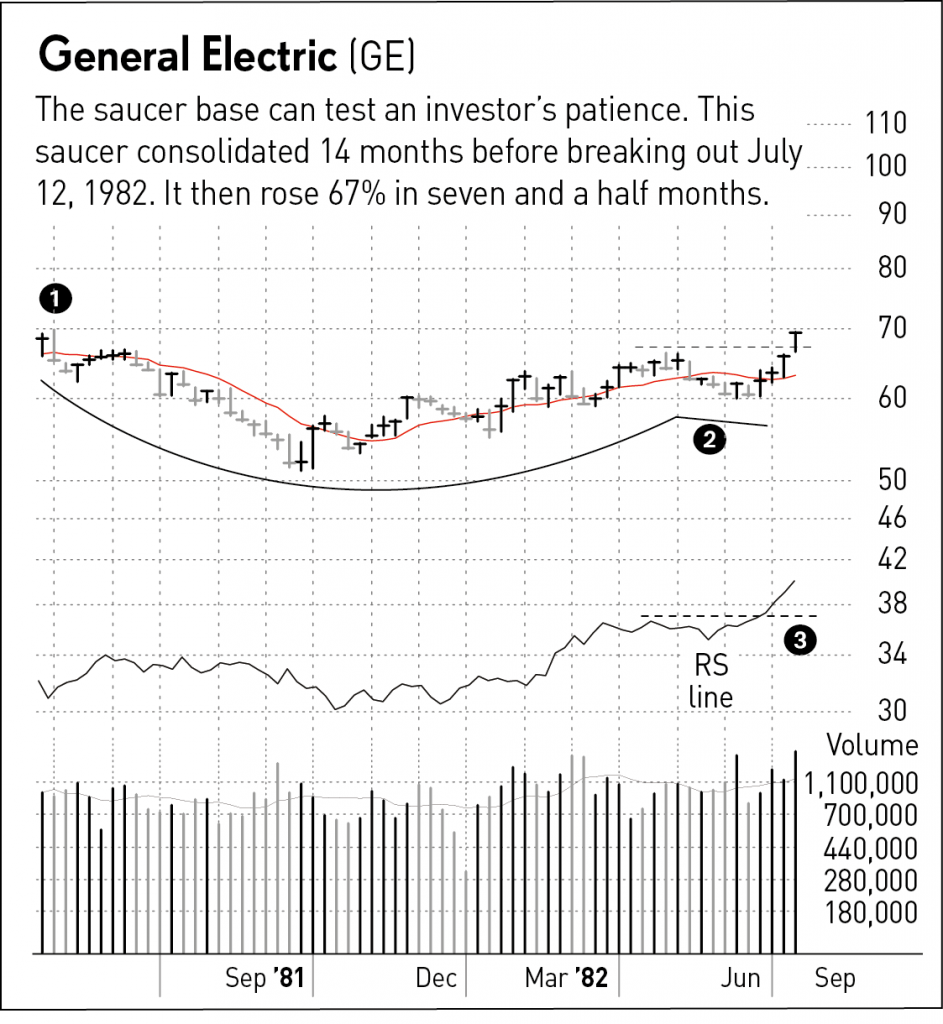 A year after GE started its saucer base, it began to etch a handle (2). The decline was less than 10%, vs. a 27% drop within the saucer. In late June, the Relative Strength line hit a new high (3).

When the RS line hits a new high before a breakout, this is a bullish sign.

General Electric broke out on July 12, 1982, in 81% greater daily volume. After briefly dipping below its 66.48 buy point during a monthlong pullback, GE picked up steam.

This column originally was published in the Nov. 3, 2010, edition of IBD.